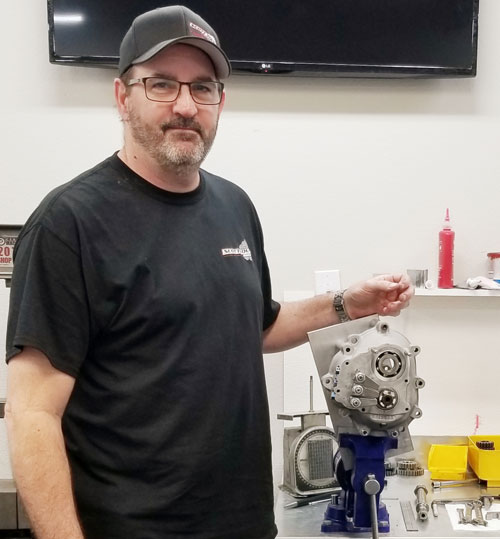 Scott Young has been around racing his entire life. He started his racing career in El Paso, Texas, in 1975 under the mentorship of Gus Carney while he was still in high school. Gus was a patriarch of the local circuit track racing scene who has been called a driver, builder and mechanic extraordinaire. Scott was like a member of the family and he soaked up everything he could learn from his expert teacher. After moving to Dallas a few years later, he got into NHRA with Darrell Goza, racing Super Comp, Super Gas and Bracket Cars. He learned his machinist skills while working with Goza Racing Products.

Scott then spent 20 years with Taylor Race Engineering, where he learned the gearbox trade from Craig. While at Taylor Race, he provided technical service and support to their many clients, assisted with trackside support at Vintage and Pro Races throughout the country, and was a machinist and fabricator while he is in the shop. He also created the FSAE program in 2004, where he provided technical support and mentorship to young racers worldwide. He worked his way up from technician to technical sales and eventually became Director of Operations.

Scott is now looking forward to the next chapter in his life as he starts his own company. With the help of great friends and the support of his wife and family, Scott Young Enterprises – Performance Gearboxes is continuing on the mantra that Craig Taylor taught him – It must be perfect before it leaves the shop. There is no room for short cuts.

Less than a month in, he already has his first race wins under his belt with two races and two wins for gearbox #0001, for driver John Thompson, in the VS2 Series at Virginia International Raceway.